One of the unfortunate side effects of the advancement of technology is the abandonment of the humble video game arcade. A type of establishment that was so strong in the 80s and 90s is now all but extinct, and home consoles and smartphones are mostly to blame.

If you’re old enough to remember going to an arcade other than Chuck E. Cheese, you know our pain. While it’s unlikely that arcades will ever make a serious comeback in any lifetime, there are a few ways to inject that feeling of excitement back into your life. Or, at least, something like it.

Ok, maybe actually building up and running an arcade isn’t as fun and stress-free as visiting one, but it’s better than saying goodbye to arcades wholesale! This is what is offered by Arcade Tycoon, a game that puts the future of arcades squarely on your shoulders and tasks you with making it work. Doing this won’t ever be easy, but it is possible with a helping hand, and that’s what we’re here to offer you today.

Join us now as we give you some tips and tricks to make your Arcade Tycoon experience fun, smooth, and successful.

The best way to get started in Arcade Tycoon is to play through the campaign missions first. Some players might be tempted to jump into the free-play mode, but you’ll miss out on a lot of the nuances of the game that are covered in the tutorial mission as well as later campaign missions.

The campaign does a great job of introducing players to Arcade Tycoon’s systems, of which there are many. Each one overlaps and interlocks to determine the success or failure of your attempted arcade, so it’s really important that you know the game inside and out before you try to go and make it on your own.

Throughout the campaign, you will be able to select from a variety of contracts that can reward you with money or some other resource that will make playing the game easier. The majority of these contracts have objectives that are fairly easy to complete, and that means easy money.

You’re going to want quite a lot of money at all times, since building and running an arcade is an expensive venture. Be sure to check the contracts tab often and take on new contracts as they come up. It’s the next best source of income after a fully functioning arcade. Even better, completing a set number of contracts will earn you a contract coin, which can be used to unlock special equipment.

Mix Up Your Offerings

If your arcade is just a bunch of retro cabinets stacked up against a wall, that might work, but it won’t be maximizing the fun of your patrons. Instead, do your best to mix up the kind of experiences you have on offer, such as setting a pinball machine down next to a retro cabinet. 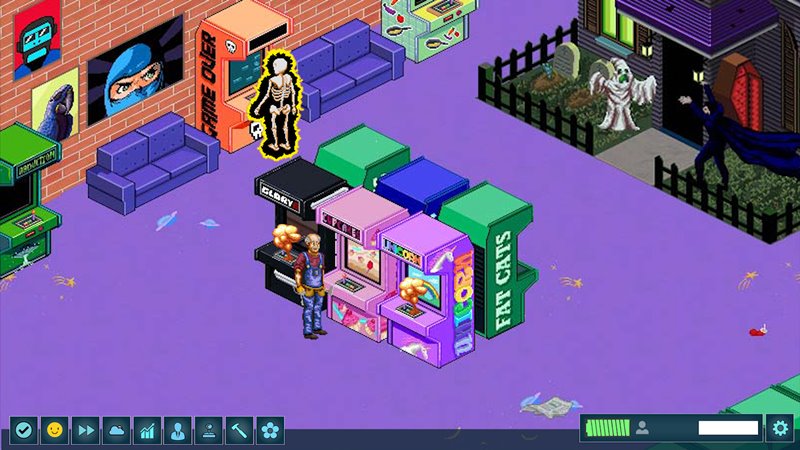 Retro cabinets are the cheapest equipment you can buy, but splurging on things like pinball machines can be better in the long run. You’ll offset that initial cost pretty quickly, since they cost more to play, but also result in more enjoyment, meaning patrons will seek them out more. Pinball machines will also earn you more stars, faster.

Use Your Stars Wisely

Speaking of stars, what should you do with the ones you earn early on? Well, instead of spending them on expensive skill unlocks, you should use smaller amounts of them to upgrade your many machines. The cheapest skill unlock is 100 stars, while an upgrade for a cabinet is only 80 (along with a chunk of cash).

Upgraded machines mean more enjoyment, which means more money, which means more resources to put into your arcade! It’s a perpetual motion machine of success! Just remember to upgrade your machines as soon as you can, and you’re basically set.

Arcade Tycoon’s options are so granular that you can actually change the number of tokens each machine costs in order to play. You can go from one to five, but be careful about overcharging for a crappy machine. Your customers will notice, complain, and maybe even kick the machine until it breaks. Trust me, I’ve seen it happen.

As the quality of your machines improves, it is ok to increase how much they cost to play, and even adjust the game’s difficulty. Just remember to listen to your patrons and adjust these settings accordingly.

How to Build a Ship in ATLAS

Space Haven – How to Build a Prison

Valheim – How to Build Your First Base